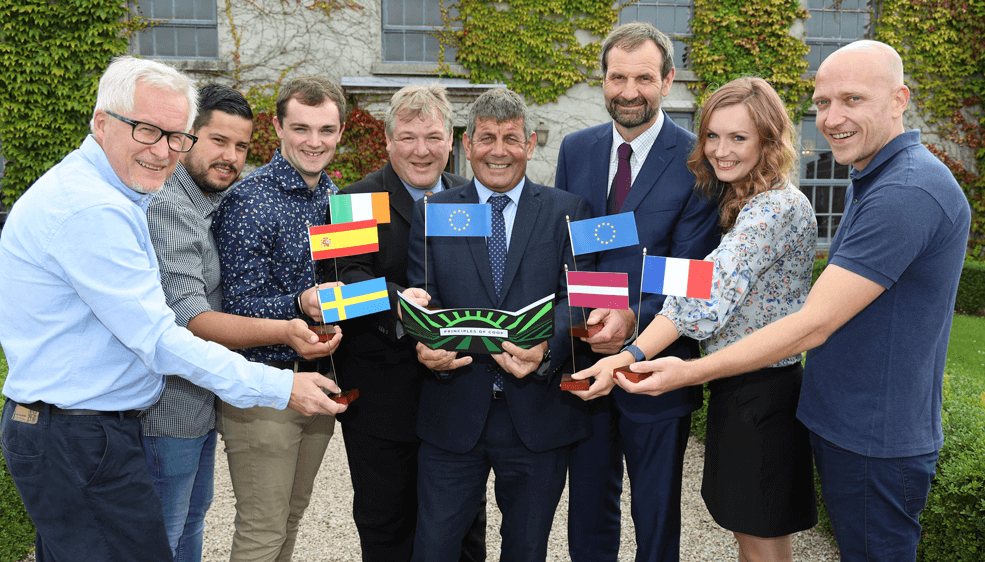 Billy Goodburn is Head of Learning and Development with the Irish Co-operative Organisation Society. In 2017, the NGO received Erasmus+ Key Action 2 funding through Léargas for a project aimed at improving agri-food cooperatives through new and innovative young farmer leaderships. The project partnership was formed by five organisations from five EU Member States: Spain, France, Latvia, Ireland and Sweden. With a budget of €279,573, pilot sessions ran in France, Ireland, Latvia and Spain. We spoke to Billy about LeadFarm and the influence it has had throughout Europe.

“For me, this is just huge, huge, huge. I can’t emphasis enough how big I believe the impact of this programme is,” Billy told us when reflecting on LeadFarm’s two-year run and its subsequent successes.

“This is our flagship project, it really is. And to have been the leader of that project feels absolutely phenomenal.”

Indeed, when you consider the progress made by individual farmers at ground level as well as the advances made within the overall sector at international level as a result of the project, Billy’s enthusiasm is wholly understandable.

What started as an initiative to bridge the gender, generational and communicative gaps in the co-operative agricultural sector quickly accelerated, setting in motion a series of developments and subsequent successes which few could have anticipated in the project’s earliest stages.

On the surface the LeadFarm project consisted of a Young Farmer Development Programme, which focused on Basic Farm Management and Co-operative Values and Cultures, an online learning platform, and the development of a train-the-trainer programme.

At its core, however, lay the concept of community and co-operation – a contingent of young farmers, who, from the very beginning, were given the opportunity to have their voices heard. Reflecting on the aims of the project, Billy elaborated on the challenges posed by the communicative gaps. Indeed, establishing access to young farmers had presented problems in many countries – an issue which became a prime focus of the project. As opposed to automatically relying on digital platforms to bridge communication gaps, young farmers were invited to participate in focus groups and share their thoughts on the issue. There they revealed more than a passing interest in adopting a hands-on approach to rectify the issue.

“We ran a number of focus groups with young farmers to identify what the best ways were [to communicate] and surprisingly we all thought it would be technology, Zoom and Facebook and all of those kinds of things,” Billy recalls.

“It turned out that, actually, that that wasn’t what they wanted. They wanted more involvement in co-operative structures and to be invited to have a look around and see how cooperatives work.”

Given the open dialogue established between young farmers and project partners in the initial stages of the project, it’s perhaps no surprise that the former committed themselves to networking throughout, and were eager to maintain the newly-established lines of contact and communication with one another post-project.

“We have WhatsApp groups, and the young farmers are engaging with each other directly through WhatsApp groups from various countries,” Billy tells us when highlighting findings from a follow-up impact study currently being conducted.

“One of the impact indicators we had in place [for the post-project impact study] was, ‘Is the networking element still happening? Are they speaking to each other? Are they asking advice?’ And that has absolutely categorically happened…the individual farmer formed  network of people, they got to see how the co-operatives operate, they were able to support their farm business at a local level.”

And while the positive impact at an individual level is undeniable, the overall impact of the LeadFarm project has been truly impressive.

From Europe-wide dissemination and the introduction of the project’s learning materials to Teagasc agricultural colleges to the subsequent establishment of committees and associations, LeadFarm is responsible for a seismic shift in the sector.

Both Ireland and Spain have established Young Farmer Representative Committees. Ireland are in the process of establishing a specific forum for women in agriculture at a national level, while Spain has started an Association of Women in Agriculture known as ‘We the Women.’

Referring to one particular element of the project which proved enormously successful, Billy explained that six learning games, which were developed to support trainers in teaching the learning materials, were exhibited in a Tech and Innovation conference in Dublin as well as being subsequently integrated into other courses in Latvia.

“In Latvia, they have put over 100 young farmers through the Young Farmer Development Programme, and approximately 20 trainers in Latvia. They’ve incorporated the games into other trainings that they deliver that are not necessarily for young farmers. When they run leadership skills course, or run leadership games, or if they’re running a finance module for other people other than young farmers, they’ll use the games in those trainings,” Billy explains.

Back at home in Ireland, the outcomes can be seen in both the educational and agri-food sectors, with dissemination going from strength to strength.

“We have trained three groups in Kildalton and the plan pre-COVID was to roll it out into Ballyhayes Ag College and also into Clonailty Ag College. It is currently being run with the 2nd year advanced Dairy programme students,” Billy says.

From professional development in a personal capacity to widespread generational, gender and communicative advancements within the sector, LeadFarm has delivered on its aims, and then some. And there’s more to come – the LeadFarm project has ultimately given way to the proposal and development of two brand-new projects. Watch this space!

This website uses cookies to improve your experience while you navigate through the website. Out of these cookies, the cookies that are categorized as necessary are stored on your browser as they are essential for the working of basic functionalities of the website. We also use third-party cookies that help us analyze and understand how you use this website. These cookies will be stored in your browser only with your consent. You also have the option to opt-out of these cookies. But opting out of some of these cookies may have an effect on your browsing experience.
Necessary Always Enabled
Necessary cookies are absolutely essential for the website to function properly. These cookies ensure basic functionalities and security features of the website, anonymously.
Functional
Functional cookies help to perform certain functionalities like sharing the content of the website on social media platforms, collect feedbacks, and other third-party features.
Performance
Performance cookies are used to understand and analyze the key performance indexes of the website which helps in delivering a better user experience for the visitors.
Analytics
Analytical cookies are used to understand how visitors interact with the website. These cookies help provide information on metrics the number of visitors, bounce rate, traffic source, etc.
Advertisement
Advertisement cookies are used to provide visitors with relevant ads and marketing campaigns. These cookies track visitors across websites and collect information to provide customized ads.
Others
Other uncategorized cookies are those that are being analyzed and have not been classified into a category as yet.
Save & Accept